William was one those Crich men who also served during WW1, where he was killed whilst serving with the Royal Engineers.

A biography, photographs and his WW1 service record can be found on the sister-site at www.crichparish-ww1. View the record –
William TAYLOR

Pre 1900 Service
There are many W. TAYLOR records of men serving with the Sherwood Foresters in the Boer War. Currently the approriate records have not been found.

He served the 2nd Volunteer Battalion of the Sherwood Foresters, which was based at Chesterfield. On 2nd January 1900, a special Army Order was issued calling upon the volunteers to reinforce the army in the South African campaign. William arrived in South Africa on 23rd February 1900, where the service companies of the volunteer battalions took part in the campaign with great credit. He remained in South Africa until his honourable discharge on 29th April 1901, receiving the Queen’s South Africa Medal, which was awarded to all military personnel who served in the Second Boer War. Various clasps were added to the medal to indicate each action and campaign of the war. William had four clasps which indicated his service in Johannesburg, Cape Colony, Orange Free State and Diamond Hill.
[Research by Simon Johnson] 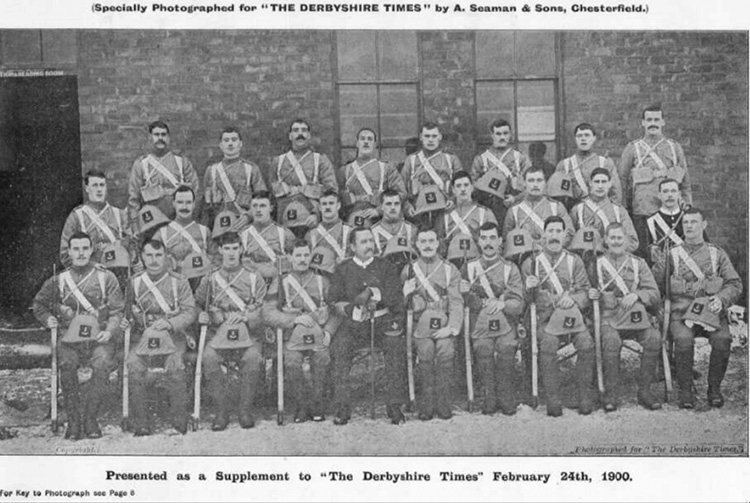 Private W. TAYLOR, of Crich is on the back row, 4th from the left