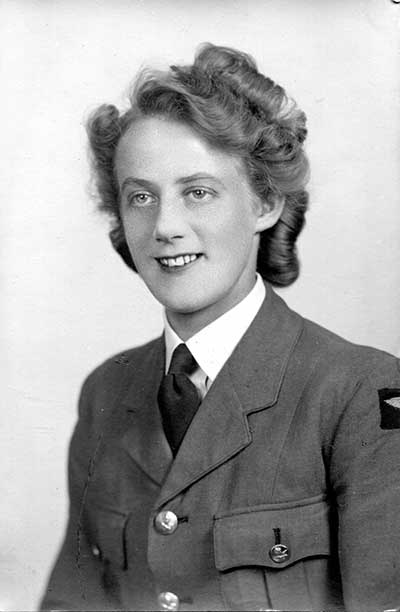 Dorothy in the WAAF during WW2 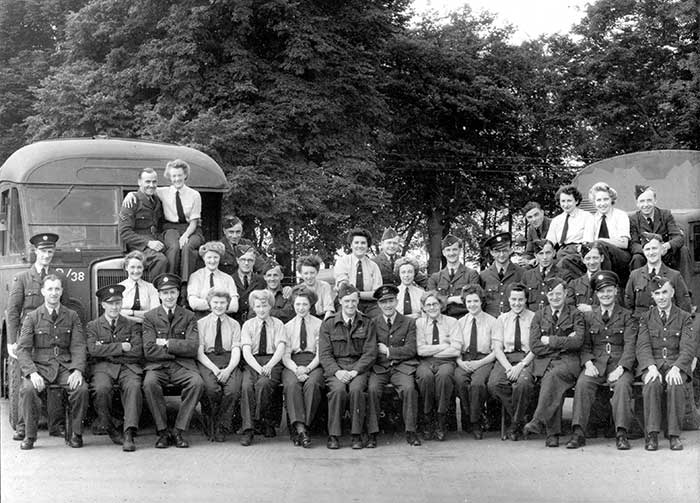 Dorothy Travis Walker was the daughter of Crich postmaster Percy Travis Walker and Edith May Walker (née Brown). Her father served during WW1 and is on Crich Roll of Honour.

During WW2 Dorothy enlisted into the Women's Auxiliary Air Force (WAAF) but was tragically killed in a road traffic accident on 27 May 1945. Her death was registered at Lower Agbrigg, West Riding, Yorkshire. (Wills and Admin, Ancestry) She lived at 64, The Common, South Normanton, Derbyshire, spinster, and died at Aberford Wakefield Road, Oulton, Rothwell, Yorkshire. Her effects went to Joan Travis Walker, railway clerk.

She is at rest in St Mary's Churchyard with a military headstone. 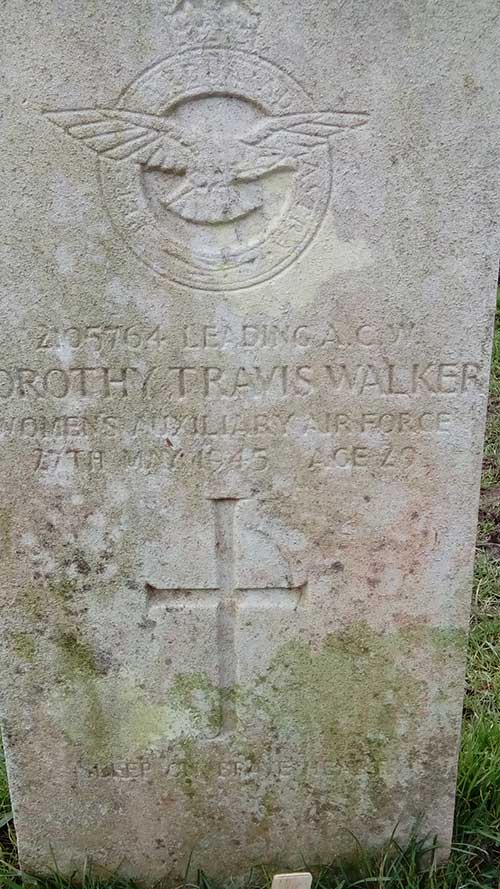 Yorkshire Post & Leeds Mercury: 28 May 1945
Woman's Death in Oulton Road Crash
A collision between a lorry and a motor car, resulted in the death of Dorothy Travis Walker (25) , of The Common, South Normanton, nr Alfreton, a passenger in the car. Her sister Joan Walker (22) and Eric White (29) a surveyor of Partridge Road, Yardley, Birmingham, who were also in the car, were taken to Leeds Infirmary and detained, the former with concussion and hemorrhage and the later with concussion and abrasions.

Yorkshire Evening Post: 28 August 1945
COLLISION SEQUEL
An Outcrop Agent's Driving at Oulton
There was a sequel at Leeds West Riding Court today to a fatal accident on the Leeds-Wakefield road at Oulton on Sunday, May 27
Eric M White (30) outcrop agent of Yardley Birmingham was fined £20 for dangerous driving, with £3 15s 11d costs and his licence was endorsed. White’s car collided with a lorry and Dorothy Travis Walker, one of his passengers, of South Normanton Derbyshire was killed.
It was stated that White, by mistake, drove his car down St John Street, Oulton which joins the main Leeds-Pontefract and Aberford-Wakefield roads and into the path of the lorry, driven by Wilfred Johnson, South Street, Primrose Hill, Wakefield. After the collision both vehicles crashed into a hedge
White and Joan Walker, sister of the dead woman were both injured.

Ripley and Heanor News: 11 November 1949
CRICH
Rev A Robinson conducted the weekly Fellowship meeting held at the Trinity Methodist Church on Friday. The subject of his address was “Creation.” Mrs D Heappey was the soloist and Mrs Adams gave a recitation Miss A Curzon was organist.
On Sunday evening Rev H E Jones dedicated set of bookshelves in memory of Dorothy Travis Walker, and two banner cases, which were given by Crich Mothers Union at St Mary’s Church. The choir sang an anthem entitled “What are these” Mr W B Glossop was organist.

You surprised me by being here,
A tuft of grass drawn up against the morning
And cold sunlight on your headstone.

Not that you dead should surprise us
On this slope of tussocks and tumbling monuments
Leaning towards the sky:

Dorothy Travis Walker of the RAF,
Leading Aircraft Woman surprised by death
Two weeks after the end of the War.

So what are you doing here lying with the men
Who dug themselves into the earth
Or fell flaming from the skies?

Your story wrapped in the mounds of time
But, in elegant Commonwealth War Dead Portland Stone,
Is equal to the thinly moustached, dash of the Spitfire dead.

Like the chap on whose knee you sit in the picture,
Your arm across his shoulder, grinning,
Your hair piled up and carefree.

And laughing you probably were too
When Eric White distracted drove you into that lorry
And killed you as the light faded that May night in Oulton.

Your father, Percy, on leave, posed and fixed
Proud with Edith and you on her knee,
Was more used to the flash and puff as the camera fired.

Edith, Postmistress in Crich, dispensing countless messages of misery;
Then Percy missing, prisoner of war. Family used to bad news
But not that midnight knocking on the door.

In Sun Lane a little brass plaque on the bookshelves
Dedicated to you at the Trinity Methodist Church.
Percy, Edith and sister Joan sadly remembering your smile.

The years have been drawn across your laugh
For the chapel is recently converted to a house,
The book shelves long flung onto a pyre or skip, I suppose.

Now your name is a query on a gravestone
With the green algae creeping upward
Over ‘Sleep on Brave Heart.’

Sorry to have disturbed you.