With thanks to Grenville Smith for the following complementary information and photographs.

Note on Joseph’s name: he was named Joseph Allen, after his grandfather George Allen Smith, also of Crich. Joseph’s second name on his birth certificate was Allen. However Joseph’s name appears variously as Allen/Allan/Alan in other records.

The following is an extract from the War Diary for 4 Coldstream Guards, National Archives: WO 171/5142, retrieved from www.pegasusarchive.org/varsity/war_4thCG.htm. [The text in square bracket are Grenville Smith's additions for clarity]

29th March 1945
0230 - The advance [from Haltern am See to Dulmen] was then resumed.  Shortly after leaving the town one of No.2 Squadron was hit by a bazooka and Guardsmen [Joseph] Smith and [Albert] Duffin were killed.  Soon after the first light the two bridges just south of Dulmen at 658567 and 665573 had been captured intact and Dulmen itself was reached by 0800 hrs.  Here a scene of complete demolition met the eye.  As it had been a town where two main roads crossed it had been completely obliterated as part of the interdiction programme of the RAF.  Air Chief Marshal Sir Arthur Harris had indeed done his work so effectively that it delayed the advance of the 4th Coldstream Group for some twelve hours.  There was no possible way through the town and so the tanks had to be content with supporting infantry by fire from the outskirts.  This was done by Nos 2 & 3 Squadrons while No 1 remained to guard the bridges against any possible sabotage.

0715 - A tank of No 1 Squadron towards the rear of the column was hit by an armour piercing shot from a flank and Guardsmen [George Thomas] Large and [Clifford] Holmes were killed and Capt. Hon. B.E. Fielding the Technical Adjutant who was standing just behind the tank wounded.

0800 - Battalion H.Q. took up residence at Hausdulmen 664572.  The Americans had some difficulty in clearing the town as one or two snipers were very troublesome.  Sgt Rye was twice wounded by them.  The last resistance was not overcome until 1200 hrs.  As soon as all possibility of enemy interference had been removed, 2 bulldozers which had been urgently summoned, began shovelling a way through the debris and a route was cleared by 1730 hrs.

2200 - The Commanding Officer gave out new orders.  The advance to Buldern was to commence at 0300 hrs. with No 2 Squadron in the lead 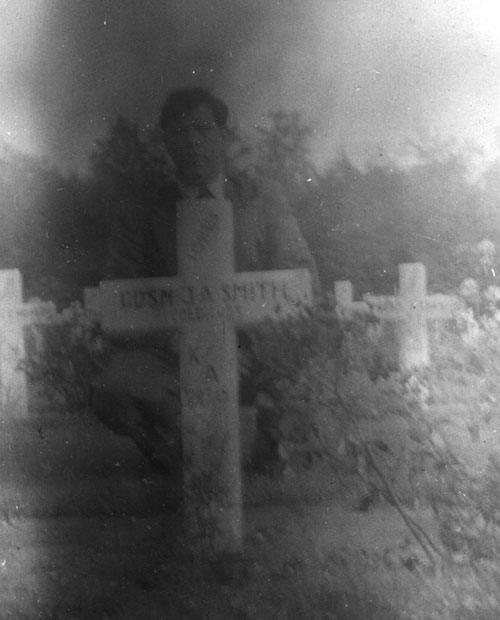 Joseph’s  grave in July/August 1951 before the headstone was erected
Photo taken by his brother Harry Smith, 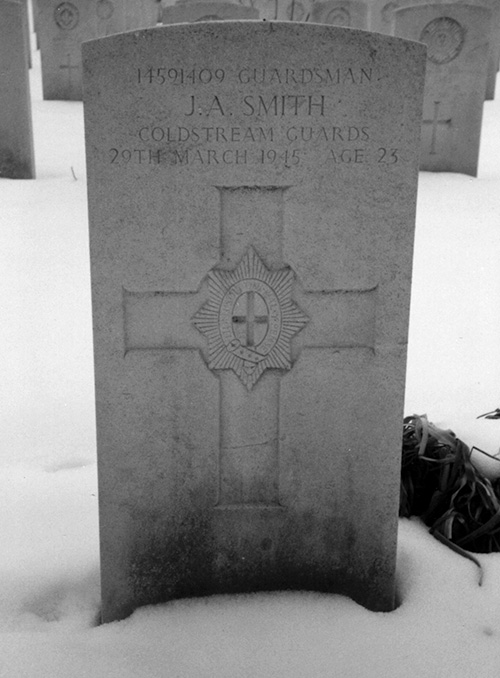 Ripley & Heanor News & Ilkeston Division Free Press 11 May 1945
BULL BRIDGE GUARDSMAN KILLED
The sad news has been received by Mrs. J.A. Smith, of Bull Bridge, that her husband, Guardsman Joseph Alan Smith, aged 23 years was missing and on April 30th that he was killed on March 29th, in Western Europe.
A letter was received from the padre and the War Office to this effect.
Guardsman Smith leaves leaves a wife and baby son, aged 16 months.
The son of Mr. and Mrs. Wilfred Smith, Sun Lane, Crich, he was employed at Richard Johnson's Ambergate, before joining up.